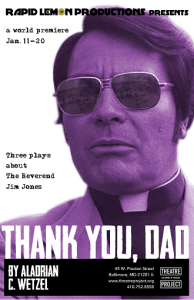 On November 18, 1978, tragedy struck in a little stretch of land in Guyana, in South America, where some 900 people lost their lives because of on crazed man. News hit hard in the United States because most of these folks were lost, disenchanted Americans, including a United States Senator. Some of you might know this story and the story of Jonestown, led by the Reverend Jim Jones and the final act of revolutionary suicide that occurred over four decades ago and Rapid Lemon Prouctions‘ latest offering, Thank You, Dad by Aladrian C. Wetzel and Directed by Donna Ibale, gives us insight into the man behind the tragedy, Jim Jones. Through Three acts, we learn of his beginnings, his ministry with The People’s Temple, and then ultimate insanity that took the lives of the people who followed him. 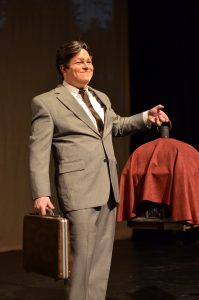 Hands down, author Aladrian C. Wetzel has crafted an intelligent, thoughtful piece of theatre. It’s apparent she has done her research and has gathered together three important phases of Jim Jones’ life to present in this work. As one who has always been macabrely fascinated by this tragedy, I’ve spent hours online watching videos and films about Jim Jones and Jonestown, and Wetzel has hit the nail on the head in her presentation. The script is well put-together and engaging and it offers facts with an artistic license that doesn’t hinder the information. Jim Jones is a complicated man, obviously, but Wetzel has managed to tell his story, through his point of view, while showing the madness that was just under the surface that some people saw directly, while others saw only a savior. The dialogue is easy to follow and helps us understand Jones as a regular man, a self-proclaimed prophet, and madman. Whether you’re familiar with this sad story or not, you will walk away learning a little more about this complex man and the massacre of Jonestown. Wetzel is to be commended and applauded for her work and efforts. 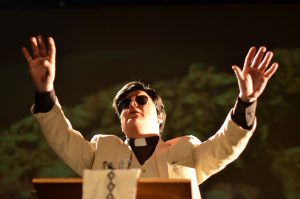 Set and Property Design by Max Garner and Projection Design by Chris Uehlinger blend perfectly into this production and add great value as a whole. Set pieces and digital images and video are chosen wisely and help move the story along as we take this journey with Jones. The full back wall projections and simple setting do not take away from the storytelling of this piece and give just enough to put the audience in the scene to better understand what they are watching. The Baltimore Theatre Project is such a great venue and the perfect space for this production that was used wisely by Garner and Uehlinger. 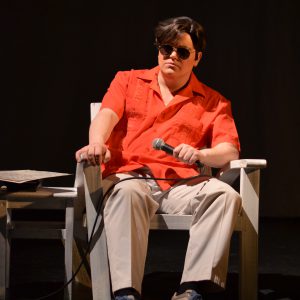 Director Donna Ibale (with Justin Johnson, Chara Bauer, and Lee Conderacci) do a splendid job realizing their visions on the stage. Ibale has wisely chosen to use a blank stage with simple set pieces that does not get in the way of the telling of the story, but adds to it. Ibale seems to have a good grasp on who this tragic person was and the history leading up to his ultimate dastardly deed. The only drawback is the recorded voices filling in as followers and such as they sound too rigid and scripted to be folks talking from the heart or giving spontaneous responses. However, the text that is spoken does move the story along and gives Jones something with which the actor portraying Jones can work. Each act is presented as a sermon, of sorts, and we are forced to pay attention, making the experience all the more immersive. Simple sets, simple staging, but fantastic storytelling. Kudos to Ibale and company for their efforts. 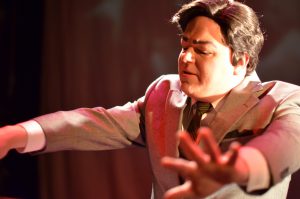 Taking on a character in a one-man show is daunting and taking on the persona of a real person can be downright trying but Lance Bankerd, a veteran of Baltimore theatre, as the The Reverend Him Jones shows no signs of difficulty whatsoever. Bankerd effortlessly embodies the role of Jim Jones and, just like the man himself, keeps the audience enthralled. He completely transforms himself to create this character, inside and out. From the younger monkey selling Jones until the whacked-out Jones giving the death speech, he doesn’t falter once and keeps his performance consistent. It’s easy to see he has a magnificent comprehension of the character, the story, and the text and his delivery is natural and engaging. Hands down, it’s a tour-de-force for Bankerd and this is not a performance to be missed.

Final thought…  Thank You, Dad from Rapid Lemon Production is a fresh look at a story that has fascinated us for over four decades. It’s such a poignant story about lost, disenfranchised souls and the man who led them to death. How could this not be great fodder for a stage play? Wetzel takes all the facts and weaves a brilliant script, wisely keeping it simple as a one-man show. Ibale and company’s Direction and Bankerd’s performance are top-notch and the production, as a whole, is to be commended. You seriously do not want to miss this kick off production of the new Rapid Lemon Productions season. Get your tickets now!

This is what I thought of Rapid Lemon Productions‘ production of Thank You, Dad… What did you think? Please feel free to leave a comment!

Thank You, Dad will play through January 20 at Baltimore Theatre Project, 45 W. Preston Street, Baltimore, MD. For tickets, you can purchase them at the door or online.