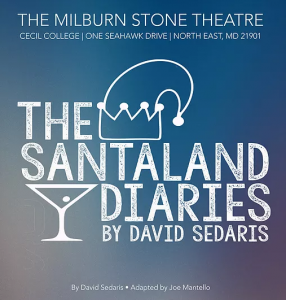 When you think of Christmas shows, you think of family-friendly fare and a rose-colored view of the world in which everything and everyone represents the best possible side of humanity. The beautiful set upon the Milburn Stone Theatre stage may have led the audience to expect more of the same: lit Christmas trees, red velvet chairs, and the dressings of Christmas cheer.

However, from the very first warning from Artistic Director that The Santaland Diaries by David Sedaris contains “4-, 8-, and even 12-letter words” that may offend the sensibilities of some audience members, there is no doubt that this will be a different kind of December evening at a theater. Luckily, it also proved to be a thoroughly entertaining evening of comedy and Christmas from a different lens.

The evening actually began with a reading of “the greatest Christmas story ever told” A Die Hard Christmas by Brandon Gorin. Gorin was charming and hysterical with his well-placed facial expressions and reactions during the reading of this unconventional Christmas classic. Gorin was followed by a display of improvisational comedy by the troupe “Improv on Rye.”

The main event of the event, however, was The Santaland Diaries. This is a stage adaptation of David Sedaris’ essays about his time working as an elf in Macy’s department store. The Santaland Diaries is a one-man show in which “Crumpet” recounts many observations about people and life behind the scenes of quite possibly the most famous Santa location.

What do you do with a one-man show when that one man is sick and cannot perform? This is quite literally the dilemma that Milburn Stone Theatre was faced with on opening night this past weekend. For them, the answer was to ply the audience with free wine and have the Artistic Director perform a reading of the show. Even without the wine, this proved to be a good decision, as Artistic Director (and now Crumpet) Andrew John Mitchell was easily able to keep the audience entertained.

Understandable nerves and newness aside that lead to some moments of rushing, it was often easy to forget that Mitchell was reading from the script on music stands in front of him. Mitchell was believable. It was easy to imagine that he had experienced these moments himself. Especially when he felt comfortable enough with the lines and the scene to look up more and slow down in his delivery, there were many genuine laugh-out-loud moments created by his down-to-earth delivery of Sedaris’ acerbic observations of the other elves and the Santas and the parents. Without the aid of other actors, Mitchell was able to make a host of characters come to life and keep the audience entertained (and occasionally shocked) throughout. He also brought this warm humanity and a sense of connection to this self-proclaimed “not nice guy” who maybe did discover just a little bit of Christmas spirit and cheer from his time with Santa.

Milburn Stone definitely delighted the audience with this production and were able to do so even despite a setback that others may have seen an insurmountable. Despite a different take on holiday productions, there may have been a miracle at work at Milburn Stone after all.

This is what I thought of Stantaland Diaries at Milburn Stone Theatre… What did you think? Please feel free to leave a comment!