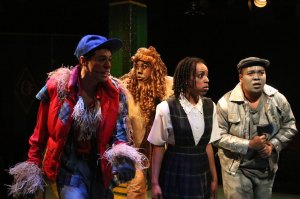 The Wizard of Oz holds a special place in many hearts the world over and rarely is a re-imagining or re-telling of a beloved story ever just as successful as the original but The Wiz, with Lyrics & Music by Charlie Smalls and Book by William F. Brown (which, incidentally had its FIRST showing here in Baltimore at the Morris A. Mechanic Theatre) most definitely falls into the category of successes. Spotlighters Theatre has opened their production of The Wiz, Directed by Tracie M. Jiggetts, with Music Direction by Brandon Booth, Choreography by Traci M. Jiggetts, Timoth David Copney, and Aliyah Caldwell and it’s a joyous, entertaining sight to behold.

Set Design by Alan S. Zemla is smart and simple considering the intimate space of Spotlighters, however, Zemla makes simple work nicely for this piece. Almost every inch of the theatre is used with each back corner dressed up as Dorothy’s Baltimore home (that’s right, Baltimore, not Kansas), The Emerald City Gate, and, in Act II, Evillene’s throne. The stages cleverly stays pretty clear throughout the production with set pieces and dressings insinuating the setting of each scene quite effectively.
Costume Design by Fuzz Roark is nothing short of stellar. The Wiz is a tricky one, but Roark has stepped up to the plate and hit a homerun. Word has it, he was practically sewing just until the the lights when up on opening night but his hard work has paid off. The attention to detail (especially the colorful and creative Munchkin costumes) and the overall design add great value to this piece. Working along side Roark were Karen Eske, who constructed The Wiz costume, Cheryl Robinson, who constructed the Addaperle and Glinda costumes, and Sarah Watson, who constructed the Evillene costume and all were spot on and grand, absolutely befitting of each character. 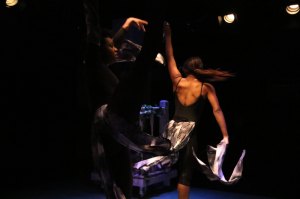 Choreography by Tracie M. Jiggetts, Timoth David Copney, and Aliyah Caldwell is a highlight of this production. This team seems to have understood the varying abilities of their cast, which is important in this area, and they’ve managed to come up with innovative and original choreography that fits well with the piece and moves it along nicely. Aliyah Caldwell (Lead Dancer), Stephanie Crockett (Dancer #2) , and Kimani Lee (Dancer #3) are exquisite and fluid as the Tornado, poppies, and Oz Ballet Dancers and give superb performances. 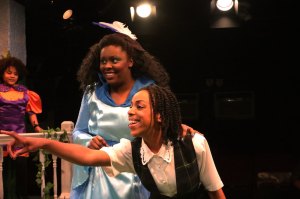 Music Director Brandon Booth does a fine job with this piece as a whole. His work with the cast has produced a nice balance and brilliant performances from the entire ensemble. Working with music that is familiar is a challenge, but Booth, along with his actors and outstanding pit orchestra consisting of himself on Keyboard, Greg Bell on Bass Guitar, and William Georg on Percussion and 2nd Keyboard, has breathed new, fresh life into this already beautiful piece.

Taking the helm of this production, Director Tracie M. Jiggetts has created this alternate Oz in a small but adequate space beautifully. Aside from a lackluster death for the Wicked Witch of the West, which not soley the fault of Jiggetts as she certainly has limitations in the space, and curious omissions probably because of space and time constraints, she has a clear vision, moving Dorothy Gale to Baltimore and out of Kansas and giving gracious nods to the surrounding areas (even mentioning Dundalk, Ritchie Highway, and ArtScape), and her casting is extraordinary. Let me take a moment to discuss pacing, as well. According to the Spotlighters website, this show is supposed to run 2 hours and 45 minutes but, Jiggetts has managed to keep this piece moving and the pacing is on point! She manages to tell the entire story in 2 hours with a 15 minute intermission and that, my friends, is uber impressive for a show of this stature, so the cuts are absolutely forgiven.

Moving into the performance aspect of this production, I wouldn’t be doing any favors with this reivew if I didn’t mention Phoenix Averiyire, Neves R. Jones, and Sofia Raquel Esme D’Ambrosi as the Munchkins. Cuteness overload! These three very young actresses were spot on in their performances and held there own against their adult counterparts. For child actors, they are flawless and throw just enough shade to be adorable and not flippant. These young ladies are definitely a highlight of this production.
Darlene Harris takes on the role of Aunt Em and, unfortunately, must have been having some vocal issues for this particular performance as she spoke through her number “The Feeling We Once Had,” and the backup vocals were kept in, making it sound a bit awkward, but… Harris acts the hell out of the number, not losing the poignancy of the piece. I hope she feels better for the rest of the run because I have a feeling she wails this number. As The Wiz himself, Timoth David Copney works it and embodies The Wiz entirely with great comedic timing and a good grasp of the character. Vocally, he gives a great, confident performance in numbers such as “So You Wanted to Meet the Wizard” and the gospel inspired “Y’all Got It!” Elaine Foster tackles the role of Glinda and this casting is superb. She brings the grace that is required for this character and, vocally, she handles her song “A Rested body is a Rested Mind” exceptionally with a delicate, but strong tone. DDm as Evillene is a powerhouse with instant command of the stage. DDm gives a strong, commendable performance vocally and in character. Rounding out the cast of characters other than the main four friends, Renata Hammond takes on the role of Addaperle and she is most certainly another highlight in this production. Her comedic timing is near perfect and her confident performance shows she’s comfortable in the role. Becasue of her portrayal, you will instantly like this character and her vocal performance is just as impressive as she belts out her number “He’s the Wiz.”

Amber Hooper as Dorothy Gale, the young lady whisked off to Oz with the help of a tornado. Sometimes it’s difficult to portray such an iconic character and Hooper does a fine job exuding the innocence and naivete of this young girl. She looks the part and seems to understand not only the character but the re-imagining of the character, as well. She’s comfortable on stage but seems to blend in, getting lost in the shuffle as the Scarecrow, Tin Man, and Lion join the journey. Vocally, she gives an admirable performance with a strong hint of classical training and she manages the material nicely. 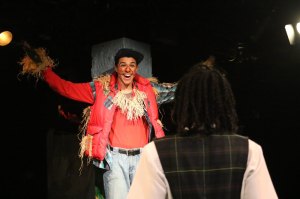 Justin Johnson as Scarecrow gives an outstanding performanc, making the part his own and bringing an lovable ignorance with a hidden intelligence, as is required for the character and making him a joy to watch. His choices are brilliant such as his nerdy laugh that got me every time. His comedic timing is down pat and his movement as the Scarecrow is spot on and Johnson makes the character likable from the get. Vocally, Johnson gives a fantastic performance with a smooth, but resonating tone that works well, especially with his main number “I Was Born the Day Before Yesterday,” and his movement in the number keeps it upbeat and entertaining to watch.

Next, we meet Shae Henry as Tin Man and he handles this role with a tranquil feel. He is lovable and gives a bang-up performance as the poor man searching for a heart. He has great chemistry with his cast mates, and his character is consistent throughout the production. Vocally, Henry gives an pleasing performance and shines in his number “Slide Some Oil to Me.”

J. Purnell Hargrove as Lion is the absolute standout in this production. He grasps not only the character but the humor, as well, giving an exemplary performance that has the entire audience belly laughing as soon as he hits the stage. He’s confident and milks this character for every laugh without becoming annoying, which is quite a feat. Vocally, Hargrove is strong and really sells his numbers such as “Mean Ol’ Lion” and his duet with Hooper, “Be a Lion.” He’s certainly one to watch in this particular production.
Final thought… The Wiz at Spotlighters Theatre is a fun, entertaining, and well put-together production that should not be missed this season. Though it is in an intimate space and limitations, Spotlighters still manages to give us a big show with all the bells and whistles expected from this show. The added humor and nods to our humble city of Baltimore engages the audience and adds a nice personal touch. Superb pacing, great casting, fantastic costumes, brilliant choreography, terrific performances, and familiar tunes take this production to the hilt and make for a very enjoyable evening of theatre. Get your tickets now! You won’t be disappointed with this one!
This is what I thought of Spotlighters Theatre’s production of The Wiz… What did you think? Please feel free to leave a comment!
The Wiz will play through April 30 at Spotlighters Theatre, 817 St. Paul Street, Baltimore, MD. For tickets, call the box office at 410-752-1225 or them online.
Email us at backstagebaltimore@gmail.com
Like Backstage Baltimore on Facebook.
Follow Backstage Baltimore on Twitter (@backstagebmore) and Instagram  (backstagebaltimore)