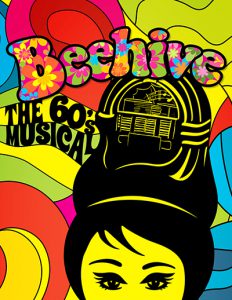 Running Time: Approx. 1 hour and 30 minutes with one intermission

The 1960s. It was quite a turbulent time in the country, as far as I can tell from research, history class, and stories my parents have told me. Everything and everyone was changing and though, it too was changing, one of the constants was music. New sounds, new voices, voices of different colors and creeds, and it was something everyone could turn to. Spotlighters Theatre latest offering, Beehive, the 60s Musical, by Larry Gallagher, Directed and Choreographed by Quae Simpson, with Music Direction by LaVar Betts, takes us back to that bygone era and brings back or introduces those tunes to today’s audience reminding us that music is always with us, no matter what. 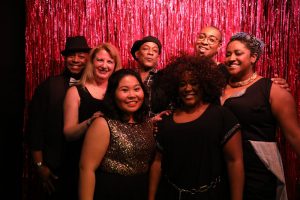 Beehive, the 60s Musical is a jukebox musical, so if you’re looking for a story line, don’t look too closely. There really isn’t one to speak of. There is a half-hearted attempt to introduce a reunion of sorts, but it really isn’t needed and would have done well to cut it completely and start with the opening number. The ensemble tries to keep up this reunion feel throughout the evening, but it just falls flat. It’s curious, also, that the first song we hear is a recording of “Welcome to the 60s” from another hit musical, Hairspray, but… why? Regardless, you’ll spend a delightful evening hearing the biggest hits from the 1960s (of course) and be treated to beautiful performances from this very able cast.

Again, I’m not sure direction Director Quae Simpson was going in with the “reunion” but, it really was not needed. The musical numbers would have stood on their own if we would have trusted them just a little more. I get it, some of these songs are unfamiliar to a younger audience, but they are good songs and can stand on their own. Another curious bit for this production is casting. The show is written for 6 females, supposedly giving it a 60s girl group atmosphere, but here we have two gentlemen joining the cast. I’m all for gender-blind casting, if it works for the production, go for it! However, it just seemed a little off for this production. It may have modernized the piece, but it comes off a little off. Also, I’m not saying the gentlemen in this cast gave subpar performances because they most certainly did not. All of the ensemble members are top notch and gave top notch performances. But including the men seems to take it over the top as if this piece is trying too hard to cover up with comedy and it comes off as hokey. Those minor flaws aside, it’s definitely a good showing for Spotlighters Theatre.

Alan Zemla’s Set Design is appropriate to the piece, and all the clichés are there, but they are needed for a piece like this. The intimate space is used wisely and, though I wasn’t blown away as I usually am by Zemla’s work, that’s no mark against him. This piece doesn’t call for much, and what he has created is superb and works well for the production.

Music Direction by LeVar Betts is stellar. This show is all about the music and Betts has guided this cast into beautiful, fun renditions of these old hits. He is even the featured performer in the poignant “Abraham, Martin, and John” and gives a heartfelt, sincere performance. As for the cast, they are in just about perfect harmony and well-rehearsed on the other numbers and Betts’ work is to be applauded.

Directions & Choreography by Quae Simpson has it’s flaws, but is, for the most part, commendable. Choreography is minimal and there is opportunity for more than what is presented, but any movement offered also depend on the ensemble and the choreography fits this ensemble nicely. It doesn’t take away from the performances but is enough to be engaging. Simpson’s use of audience participation and breaking the fourth wall, though probably required for this type of show, seems a bit forced, especially because of the intimate space at Spotlighters. The audience does seem to enjoy the participation, but it’s not my cup of tea, so, it could just be me. Aside from the interesting casting and the few aforementioned minor faults, Simpson’s staging is quite good and he keeps it interesting with seamless transitions from one song to the next. Overall, Simpson has done a fine job with this presentation. 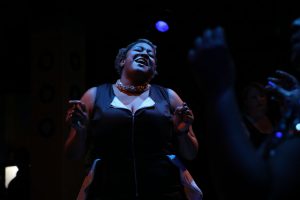 Moving on to the performance aspect of this production, Nicholas Miles and Marela Kay Minosa are crowd pleasers, and it’s easy to see their energies are not for naught especially in Minosa’s fun and upbeat rendition the popular and timeless Lesley Gore song “It’s My Party” and the poignant “Baby, I Love You,” made popular by The Ronnettes. Meanwhile, Miles gives us a fun and humorous performance of “My Boyfriend’s Back,” originally released by The Angels, with all the schtick and tongue and cheek you can handle.

Highlights of this particular production are Timoth David Copney, who really seems to have a great comprehension of this music and style, especially with his near flawless performance of The Shirelles “Will You Still Love Me Tomorrow,” which ends up being one of my favorite interpretations of this song, and his featured bit in Dusty Springfield’s “Son of a Preacherman.”  Karen Steelman holds her own and makes the audience take notice taking on and belting out the intense and popular Janice Joplin hits, “Me and My Bobby McGee” and “Take a Little Piece of My Heart.”

Rounding out this stellar cast are two definite stand outs, Danielle Harrow and Asia-Lige Arnold. These two ladies perform every one of the their numbers with heart and soul, and with superb, strong voices. Harrow, knocks it out of the park with her takes on Ike and Tina Turner’s “River Deep, Mountain High” and Ike and Tina Turner’s “Proud Mary,” among other hits from The Ronnettes such as ”Walking in the Rain” and “Be My Baby.”  In the She is also featured in an Aretha Franklin medley, including songs such as “Chain of Fools,” “Never Loved a Man,” and “Natural Woman.” In the same vein, Arnold give splendid, memorable performances of Lulu’s “To Sir With Love” and is featured, as she should be, in the same Aretha Franklin medley in which she will knock you out with her strong, emotional vocals that are hard to forget.

Final thought… Beehive, the 60s Musical is a fun journey of nostalgia and great music that will take you back, even if you didn’t live them. It’s easy to at least recognize the tunes, and they are definitely the sounds that changed the world. Though the story line isn’t much to speak of, it doesn’t matter because the songs will keep you engaged and even singing along and tapping your foot. The ensemble gives 100% effort and their work is stupendous. The voices in this production are absolutely amazing and each performer is a powerhouse on his or her own, with a band to match. Really, the years will melt away as the both poignant and rockin’ songs are performed one after another. Though unplanned from Spotlighters Theatre original season, this is a perfect replacement and one you should not miss!

This is what I thought of Spotlighters Theatre’s production of Beehive, the 60s Musical… What did you think? Please feel free to leave a comment!