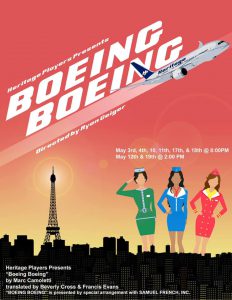 Boeing Boeing by Marc Camoletti is helping fly The Heritage Players through to finish out their 43rd season. Directed by Ryan Geiger, this script of this French farce (translated into English) feels lost in translation in 2019. However, Geiger is determined to deliver a sixties authenticity in it’s treatment of women as objects and pawns to move around for the benefit of the American protagonist. 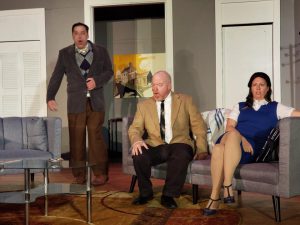 In short, the Heritage Players website surmises the show rather nicely. “American bachelor Bernard is living in Paris and couldn’t be happier. He has a flat in Paris and three gorgeous stewardesses, Gloria, Gabriella, and Gretchen, all engaged to him without knowing about each other. His live-in maid, Berthe, is the only person who knows about his deceptive life until his friend from Wisconsin, Robert, unexpectedly comes to stay. Suddenly, Boeing begins rolling out their new speedier jet planes to the airlines, throwing off all Bernard’s careful planning. So, all three stewardesses are in town simultaneously. However, the timid Robert begins to forget which lies to tell to whom, and catastrophe looms.”

Be begin with our in-flight instructions and the details of the production are showered with thematic puns from our Captain. The information covered is thorough (some information is duplicated from the program) and runs a bit long foreshadowing some pacing issues that arise during the show. Heritage Players has chosen two charities to donate part of their proceeds, which are the Spring Grove Hospital Patient Fund and The Air Charity Network. (www.aircharitynetwork.org) 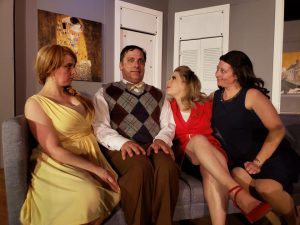 Lights up on the living room of a simple bachelor pad with a color scheme that is flat enough to help the characters in costume really pop. Art on the wall from each of the stewardess’ respective countries is a very nice touch to show that Bernard (John Sheldon) has thought all of this through and doesn’t leave things to chance. Sheldon enters cool, calm, and collected assuring his maid Berthe (Claire Sherman) that everything will be fine and bending to the wind is easier than fighting it. Their conversation flows naturally and they feel as if they have had a good, albeit unnatural, working relationship. The place is clean, tidy and in good order though does not feel lived in. Some trim on the walls and a few practical lights could do wonders to finish the look of the apartment of the successful architect.

Geiger’s set design is built to be used and is sturdy enough to keep the walls from any movement while the doors continually open and close. Though the actors’ timing with the doors was solid and snappy, occasionally the joke in between was missed due to a slower comedic timing. The script calls for some out of date objectification of women, which is currently avoided or muted, but Geiger has boldly decided to stay true to the script allowing the audience the occasional laughter through awkward situation. The hard work that has been put into the show is evident and Geiger’s knowledge and love of the script is displayed well throughout the evening. 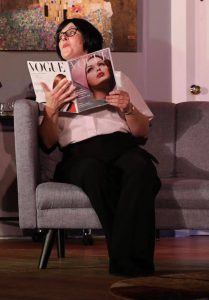 As Bernard, John Sheldon struts the stage and kicks back with an easy confidence that his plan is flawless. Watching him witch between calm and collected to panicked and lost is like flipping on the light switch. His routine is initially disturbed by a surprise visit from Robert (Richard Greenslit), a friend who has kept him to his word about visiting Paris. Greenslit’s interpretation of Robert is quite the opposite of Bernard: exact in his word choice, anxious and relentless in needing clarification. Greenslit’s execution is humorous and fun and also pays off well with Sherman, whose character is slowly getting fed up with changing meals and sheets for each of the three stewardesses.

Claire Sherman maintains Berthe’s professionalism while being able to toss in a line here and there at the other character’s expenses. Her delivery was strong and consistent and pleasant to watch on stage. Jessie Duggan as the American stewardess Gloria entered confidently and excitedly playing to the European stereotypes of Americans. Dressed all in red, she was certainly playing to her charms to seduce both men in order to get what she wants. Katie Sheldon played Gabriella, the Italian stewardess, is delightful to watch as she takes control of her scenes. Her chemistry with Bernard creates some shining moments throughout the show as she fights to have things go her way. Her exasperation with Bernard and Robert is clearly evident as they usher her to the guest bedroom and the audience can empathize her defeat when arriving from the restaurant. Making a grand entrance, Gretchen (Kate Crosby) is the German stewardess who makes her presence known on stage. Crosby grabs this character and shows her how to handle the two guys. We can see her wrestling with indecision throughout but is firm when she makes up her mind. All three women with accents stay in their general lane with some slight variations along the way but we’re able to get the region clear enough.

If the accents weren’t enough to tell the three stewardesses apart, Robin Trenner’s costume design certainly puts all three love interests in their primary corner. The intention is certainly clear, if not a bit overstated. Speaking of clear, sound design by Stuart Kazanow was never a problem and sitting halfway back I could hear every line very nicely. Be sure to fly over to Catonsville, home of The Heritage Players, for their show before it’s Boeing, Boeing, gone.

This is what I thought of Heritage Players’ production of Boeing Boeing… What did you think? Please feel free to leave a comment!

Boeing Boeing will play through May 19 at Heritage Players at The Thomas Rice Auditorium of the Spring Grove Hospital Campus, Catonsville, MD. Purchase tickets at the door one hour before show time or purchase them online.