It’s late, you’re safely tucked away in bed… you hear a noise. Is the house settling? The cat looking for a treat? An uninvited critter in the kitchen?… or something more sinister? These are the types of things that can keep you up at night and a good ghost story can have the same effect. Fells Point Corner Theatre’s (in collaboration with The Collaborative Theatre Co.) latest offering, the World Premiere of The Quickening by Mark Scharf, Directed by Ann Turiano, gives us an original ghost story that, with a few jump-scares and cleverly placed effects, will not only raise your pulse and possibly keep you up at night, but also make you think about what happens when we close our eyes for the last time. 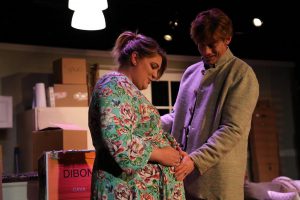 As stated, The Quickening, is a good old-fashioned ghost story set in present day. The story revolves around Beth, a young pregnant woman in a new neighborhood in a new town who knows the new house she lives in is more than meets the eye. She befriends her neighbor, Philomena (better known as Phil), a logical thinker with an open mind. Matt, Beth’s husband is a Civil War reenactor (a confederate soldier, no less), who believes most of the trouble has to do with Beth’s “condition” and how it effects the way she thinks. Meanwhile, Rosemary, Beth’s mother has come to help prepare for the baby and reveals a family secret that explains some of the strange goings on at the new house. Along with this explanation and a little research by Phil, the real story of the home unfolds with frightening conclusions that makes us question life, death, and the afterlife, if one believes it so.

Cassandra Dutt’s Set Design is phenomenal and uses the space wisely. Her use of levels to present different rooms and locations is wise and her attention to detail is top-notch. The Fells Point Corner Theatre stage is an intimate space but, with such a natural, authentic design, Dutt has managed to bring us into the living space of this young family which makes the audience feel closer to the action, adding to the experience.

Technical aspects for a horror story or ghost story on stage can be tricky and teeter on the line of corny but, working in tandem with Set Design, I’d be amiss not to mention that the Lighting Design by Tabetha White and Sound Design by Devyn Deguzman which is absolutely stellar giving life to this story. White sets the scenes and changes moods with her sometimes subtle, sometimes drastic change in lighting to invoke both calmness and a frenzy with lighting effects. Deguzman, too, adds value to this production with the “bumps in the night” sounds and disembodied voices that go hand-in-hand with ghost stories and would fall flat without them. Both White and Deguzman are to be applauded for their work on this piece.

Ann Turiano, who is no stranger to the stage, on or off, takes the helm of this production and her Direction is exceptional. Bringing a brand new piece to the stage can be a daunting task, but Turiano seems to have taken it in stride with a clear-cut vision and great comprehension of the material. Her handling of this new work is impressive in both staging and overall concept. It’s a modern setting with an intricate story but Turiano has given us a polished, well-presented production that shows and tell the audience a story simply without the bells and whistles but with just the right amount of effects and concentrating more on character and dialogue. It’s also worth saying her casting is on point for this piece. Kudos to Turiano for a job well done. 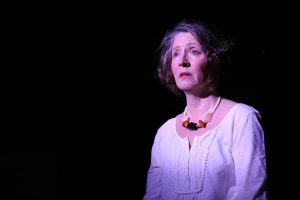 Award winning Baltimore playwright Mark Scharf has crafted a lovely story that is more about questioning faith, life, and death rather than a simple horror story. The scares are there and the creepiness factor is definitely apparent throughout, but his dialogue is well-thought out and well-researched. A few obligatory mentions of Baltimore seem a bit out of place, but there are only a few and do not hinder the production from moving forward. His in depth explanation of theories of physics and Catholic dogma are on point and actually teach a few things. The script did feel rushed at times – for instance, I would have preferred the realization and acceptance of what was going on in the house to be a little more gradual. It’s as if the characters simply accept the strange goings on with a few objects moving on their own and a strange little boy lurking about. However, that being said, I completely understand, for the sake of time, things need to be cut and the action still moved along smoothly and the story was told completely. Overall, this is an outstanding showing and I’m looking forward to seeing more of Scharf’s work in the future.

Moving on to the performance aspect of this production, we are treated to a strong, small ensemble who brings these characters to life with great authenticity and emotion making for beautiful performances all around. To begin, Mariane Gazzola Angelella takes on the role of Rosemary, the clairvoyant mother of Beth and Amanda Spellman tackles the multi-faceted role of Beth, the tortured and targeted occupant of the house. 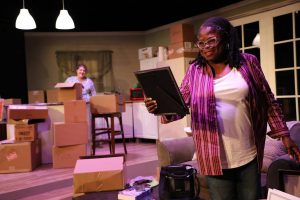 Angelella is perfectly suited for her role as Rosemary, a good ol’ Bawlmer girl, who desperately wants to help her daughter through a tough time. Angelella even produced a good Baltimore accent but those born and raised can easily pick up that it is not a natural accent, but… it’s a hard accent to crack so, all in all, she does a superb job. Her character work is notable, as well, and she seems to have a good grasp on Rosemary, keep the character consistent throughout exuding the emotion of a parent of a child who is hurting in one way or another. Along the same lines, Spellman is excellent as the Beth and plays her to the hilt. Her chemistry with her cast mates adds a realness and natural air to her performance and she, too, has a good comprehension of this character and trials. Though she sounded a bit scripted, at times, overall, she gives a strong, confident performance that is a joy to watch.

A highlight of this production is David Shoemaker as Matt Wells, the doting, logical husband of Beth (and completely outnumbered male). Shoemaker is no stranger to the stage and his natural abilities shine through in his gestures delivery of his dialogue, adding an absolute authenticity to the character. It’s clear he understands his character and his performance helps the audience understand him, as well. He is certainly one to watch in this production.

Last, but certainly not least, Debbie Bennett takes on the role of Philomena (Phil), the kindly neighbor who befriends and helps the family even though her logical side is conflicting with her faithful side and she is the standout in this particular production. This character is the most complex of all the characters because of this conflict and Bennett presents it superbly. Her delivery and portrayal of the character is sincere which adds to her performance. This character seems to be the bridge between the supernatural and the natural in this piece, putting a lot of responsibility on Bennet, but she carries it well and does not falter. I’m looking forward to seeing more performances from this actress.

Final thought… The Quickening at Fells Point Corner Theatre is a scary (or horror) story that is presented in a very well put-together, well thought-out production. The script flows nicely, though at time seems a bit rushed, but overall, is a good story filled with intelligent, natural dialogue and diligent research. Be forewarned, there are a couple of jump scares but the effects are absolutely brilliant. The performances are admirable and the technical aspect is outstanding. Creating characters and bringing a piece to life for the first time can be difficult, but this team has done it beautifully. The entire cast, crew, and playwright are to be commended for their efforts and this is not a production you want miss this season.

This is what I thought of Fells Point Corner Theatre and The Collaborative Theatre Co.’s production of The Quickening… What did you think? Please feel free to leave a comment!