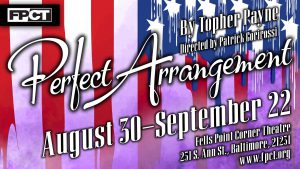 Picture it, 1950; Washington, D.C. The war is over, the U.S. has come out of it victoriously, and Korea is just a thought. Nuclear families are popping up all over, with their white picket fences, and everything just seems to be right and polite. It was a simpler time… or was it? If you didn’t fit the norm, was it so simple? Could you make it simple? These are the questions touched on by Fells Point Corner Theatre’s latest production, and the first of their 2019-2020 season, Perfect Arrangement by Topher Payne, Directed by Patrick Gorirossi. It’s a funny, sad, uplifting, and poignant roller coaster about how you never really know what happens behind closed doors. 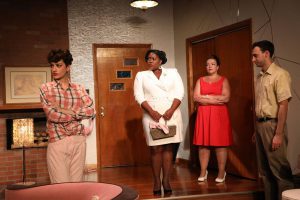 According to Samuel French, “It’s 1950, and new colors are being added to the Red Scare. Two U.S. State Department employees, Bob and Norman, have been tasked with identifying sexual deviants within their ranks. There’s just one problem: Both Bob and Norma are gay, and have married each other’s partners as a carefully constructed cover. Inspired by the true story of the earliest stirring of the American gay rights movement, madcap classic sitcom-style laughs give way to provocative drama as two ‘All-American’ couples are forced to stare down the closet door.”

From the start, I had a feeling this production was going to yield good things because Set Design by Bruce Kapplin is top notch. This design completely transports the audience back to 1950 Georgetown in Washington D.C. and Kapplin’s attention to detail is second to none. From the mid-century-style furniture to the fireplace and mantel on the back wall, and subtle colors, this set is a character all on its own and Kapplin deserves a hefty round of applause for his outstanding efforts.

Costume Design by Heather Johnston impeccable. As we’re nicely into the 21st century, any 1950s piece can be considered a “period piece” and those can be tricky to costume. However, Johnston has done it and managed to put these actors in the time period without skipping a beat. Her choices for each character made them individuals and believable. From formal wear to every day duds, Johnston has pulled off a brilliant design and deserves all the kudos.

Patrick Gorirossi takes the reigns of this production and it is well in hand. Aside from a few “too hokey” bits dealing with advertising that go a little over the top (thought it may have been written this way), this is a tight, well put-together production. Gorirossi knows this material and has a deep comprehension of the text and this is clear in his staging and character work from his ensemble. A truly phenomenal production from a truly skillful director.

I’ve got to begin the next part of this review, concerning performances, by stating every single one of these performers held their own in this ensemble piece. Their chemistry was exquisite and they seemed to know their characters quite well making for great performances all around.

David Forrer as Theodore Sunderson and Ebony N. Jackson as Kitty Sunderson, are the seemingly elder characters; he’s the boss and she’s the bosses wife. Forrer and Jackson have these characters down pat. They are both totally believable in these roles and grasp the slight naiveté of folks who may have come of age in a different, earlier time. Forrer plays Theodore with a tough nosed man’s man and boss, but with a compassionate underbelly that does shine through making his character likeable and unlikeable at the same time. He’s confident in this role and has a great presence. Jackson is an absolute highlight in this production as Kitty. She performs the 1950s housewife (albeit rich housewife) flawlessly and knows how to get around the stage. Her comedic timing is on point and she’s certainly one to watch in this particular production.

Another strong performance comes from Shamire Casselle, who is a standout as Barbara Grant, the antagonist turned friend. This character is out of the ordinary for the time and she really doesn’t seem to care about what others think or say about her and is willing to fight for what she believes, even if it goes against the grain. Casselle is extraordinary in this roll and gives a strong and impressive showing.  She knows her character and has a good grasp on what this woman is trying to accomplish making for a praise-worth performance all around.

Moving to the central characters of this piece, we have Nate Krimmel as Jim Baxter, Holly Gibbs as Norma Baxter, Gabe Fremuth as Bob Martindale, and Ari Eckley as Millie Martindale. These four performers are near-perfectly cast and play well off of and with each other making for an authentic portrayal of their complicated relationships.

Nate Krimmel as Jim Baxter does well with his character, but there are times I feel he’s trying a bit too hard for the laugh. He gives off more of a childish behavior throughout that is, frankly, somewhat annoying but… he makes up for this with his heart-felt performance towards the end of Act 2. His character seems to become deeper, in a way, and Krimmel’s portrayal  shows his understanding of this character and this character’s place in the story.

Ari Eckly, who takes on the role of Millie Martindale, gives a confident performance but, at times, seems uneasy with the comedy. Thier dramatic performance is remarkable and they have a good grasp on the material and this character, but the comedy is not the strongest. However, that’s not to say their performance isn’t up to par, because it most certainly is. Their portrayal is believable, as is their portrayal of the secret relationship their character has with Holly Gibbs’ character, Norma. The chemistry between these two make for an authentic relationship.

Speaking of Holly Gibbs, she knocks it out of the park and is a standout in the role of Norma. She takes this role and makes it her own with a deep understanding of the turmoil within this character. Norma is the first to vocalize how fed up she is with the “arrangement” and wants to live her life in a way she sees fit and Gibbs’ mannerisms and delivery are on point to make this clear. She is comfortable on the stage with a strong presence, giving way to an impeccable performance.

Another standout is Gabe Fremuth in the role of Bob Martindale, the more level-headed, if not staunch member of this unfortunate quartet. His uptight take on this character is just what it needs and his portrayal of a conflicted man, wanting to protect what he has as well as uphold his beliefs (which seem to clash) is incredible. His chemistry with Nate Krimmel as Jim, his secret lover, is good and he plays off of and with Eckly and especially Gibbs, quite nicely. The conflict in his character of wanting to keep the world and the U.S.A. moral but living a life that is thought of, at the time, to be amoral, and Fremuth’s portrayal of that conflict is what makes this performance so poignant as well as infuriating. Kudos to Fremuth for his efforts and work.

Final thought… Perfect Arrangment, is right up my alley when it comes to shows. It’s a drama heavy show but throws in an abundance of comedy to balance it out and the balance in this script is spot on. The cast is top notch and have great chemistry and the staging and Set Design bring it all together got make for a phenomenal production. It’s an important story that needs to be told and it’s still quite relevant in 2019. This is not a show you want to miss and Fells Point Corner Theatre has hit the ground running and set the bar high with this production. Get your tickets now. You won’t be sorry.

This is what I thought of this production of Perfect Arrangment at Fells Point Corner Theatre.… what do you think?