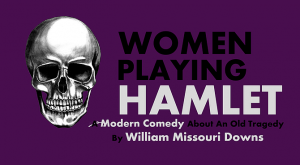 Running Time: 1 hour and  50 minutes with one intermission

To be or not to be….Hamlet? This is the question that Jessica, played by Cassandra Garcia, struggles with during In Your Face Productions‘ production of Women Playing Hamlet, by William Missouri Downs, Directed by Jack Taylor. The script shows her delving into whether or not she should or could play that iconic role. Along her quest, she raises greater questions about the meaning of the source material of Hamlet, as well as what it means to be an actor, to be a woman, and to be a person. There are many deep issues raised about whether those things are the same or different for a man or a woman and how they have or have not changed from Shakespearean times to the 21st Century. Ultimately, it all comes together to a satisfying conclusion. Even better, there is tons of laughter and absurdity along the journey.

With only four actresses doing all the talking and three of them taking on multiple roles, this production was a very ambitious selection for a young company with a young director and a young cast. Just as the script itself attacks head-on concerns that Jessica is too young to play Hamlet, so does In Your Face Productions in showing the ability with which they can tackle difficult work. Although there is some room for growth, this is an overall solid and admirable handling of an incredibly heady and witty script that requires the performers to command the stage.

With simple lighting, well-designed PowerPoint slides creating a multimedia performance, and minimal-style set pieces, Director Jack Taylor sets a stage that is apropos for the script, which, in one of its many breaks of the fourth wall, explains that the actors will be using “verbal scene painting” to really set the locations of the various scenes. Taylor also does good work in staging the show. Characters move about the stage with intrinsic purpose without every making the monologues and small scenes seem stagnant. He takes a small stage and makes it seem like a much larger world. He also assembled a cast of four strong young women to bring the words to life.

At the helm is Garcia. Large portions of the show, starting with the first several minutes, are just monologues by Garcia. She keeps them interesting and varied. Garcia has excellent comedic timing and facial expressions. She has a real presence and energy on stage. It would be nice to see her relax into the role a little more. At times, nervous energy seems to keep her from connecting more realistically with some of the serious notes in the script. This works really well as Jessica struggles to find her authentic self, but it would have been nice to see a greater contrast towards the end. However, for such a young actress, she shows impressive potential.

The rest of the cast of characters are all played by a troupe of three actresses, who, in a Shakespearean reversal, play the male roles with mustaches. A few mustache mishaps aside, very simple and effective costume pieces transform the actress into a variety of different characters.  Actress 1 is Holly Blondheim. She is both a professor and Jessica’s acting coach. Blondheim has a commanding presence on stage and a good knack for making the over-dramatic seems natural. While it would have been nice to see a greater distinction between the two roles, she really shines as Gwen, the has-been acting coach. Throughout the show, she allows the characters to have layers stripped away to see the real person underneath the bravado.

Taking on considerably more roles is Actress 2: Morgan Tacka. She is a rival actress, a priest, a delivery person, a soap star, and an adolescent tech whiz. Morgan possess a very warm, likable quality on stage. The distinction between her characters is subtle yet effective. She makes grounded characters out of absurdist moments that serve as balance to the other, more dramatic performances. Even with these other strong performances, it is Actress 3 (Olivia Bowley) that consistently steals the scene. Bowley is an absolute master of accents, characterizations, and comedic delivery. She is a Shakespearean expert, Jessica’s mother, a psychologist, a bartender, a brain dead soap star, and a grave digger. Each character has his/her own unique voice and mannerisms. She shows exceptional craft in taking on the different personas and breathing them life.

In Your Face Productions definitely proves that young directors and young actors have the ability to push themselves while tackling difficult materials. This production is a strong demonstration of the collective group taking on this challenge with bravado. As the audience watches Jessica grow as an actress and a young woman as she faces the challenge of playing Hamlet, so too they see these young performers bloom through the process.

This is what I thought of In Your Face Productions’ production of Women Playing Hamlet… What did you think? Please feel free to leave a comment!

Women Playing Hamlet will play through August 17 at In Your Face Productions, at Presbury United Methodist Church 806 Edgewood Rd Edgewood, MD 21040. For tickets, you can purchase them at the door or online.