Running Time: 2 hours and 25 minutes with one 15-minute intermission
Theatre is supposed to do something to us, emotionally. Whether we’re supposed to think, feel sad, feel hopeful, or simply be entertained, it’s supposed to do something. The Elephant Man by Bernard Pomerance, currently playing at Fells Point Corner Theatre and co-produced with Collabortive Theatre Company does all of it. With Direction by Anthony Lane Hinkle, Set and Lighting Design by Kel Millionie, Costume Design by Ben Kress, and Sound Design by Chris Aldrich, this poignant, very real story is breathtakingly woven together flawlessly and had me feeling all the feels and thoroughly entertained.
The Elephant Man gives us the true story of Joseph Carey Merrick (1862-1890), who is usually called John Merrick, as in this play, and his trials and tribulations as a person with a rare medical disorder in Victorian England. It also teaches us about ourselves and our reactions to people who may be “different” and how those people make us feel a little better about ourselves. Human nature is unpredictable and, at times, a very scary thing. 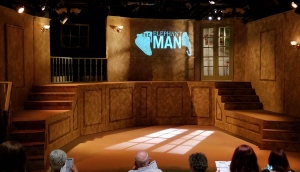 To begin, walking into the main theatre of Fells Point Corner Theatre, my initial excitement came from Kel Millionie’s beautiful set design. The unit set has smart levels that all lead to the center of the stage where most of the action takes place. The main entrance, through glass plated french doors blend nicely into the set design and the lower entrance, a hallway of sorts, is a nice contrast to the elegant french doors. The earthy tones lend well to expressing the Victorian era. Millionie used his space very wisely, cleverly creating storage for set pieces not in use within the set itself. The clean, subtle set was near perfect for this production.
Along with Set Design, Millionie has double duty as the Lighting Designer and this design is just as fantastic as his set design. I suppose, who better to light the set than the designer and in this case, it matches up stunningly. His use of shadows and dim light sets the audience not only in the mind of the Victorian age, but in the context of the show, exhibiting how Merrick had to live in the shadows for much of his short life.
The Set and Lighting Design added immense value to this already successful production and major kudos go out to Millionie for his thoughtful and impressive work.
To add to the technical side of the production, Sound Designer Chris Aldrich did a superb job finding music that fit the period and set the mood for scenes and added to the production rather than interfere. To go along with the sound, this production utilized projections to move the story along. The use of projections can be tricky and can almost ruin a show if not used properly however, Directory Anthony Lane Hinkle and Set & Lighitng Designer Kel Millionie took on the responsibility of choosing appropriate projections and they are all spot on. They do not take away from the production or add fluff, but are apart of the story and the action and help move it along, filling in the blanks for the audience as to better understand Merrick’s story. 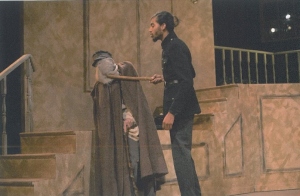 Being a period piece, costumes play a very important role in this play and Costume Designer Ben Kress hits the nail on the head! The costumes are very appropriate and complement the actors wearing them. From the elegant gowns of the ladies to the sharp suits of the upper class gentlemen, to the ratted and tattered coats of the lower class characters, each costume was well thought-out and the actors are quite comfortable in them. There are a few absolutely beautiful gowns (with help from Shelly Steffens Joyce) and every costume made each character more real and tangible. 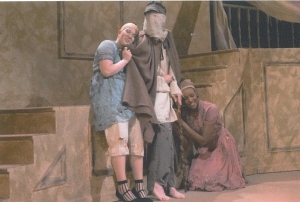 Anthony Lane Hinkle’s integrity and ingenuity shines through in his direction of this piece. His blocking with the use of levels keeps the movement of the actors interesting and purposeful and each actor seems to really understand his or her characters. All but one actor in his cast takes on more than one role and each character is different and fresh. His use of projections to accompany the story is helpful to the audience and the information he chooses for projection does not cause a distraction but educates. It’s clear that Hinkle has taken his time with this piece and researched the subject to get a better understanding of the story of Joseph (John) Merrick and wants to not only entertain, but teach his audience about the life of this remarkable man. From day one of accepting directing responsibilities for this proven, emotional piece is challenging but Hinkle is quite successful in transferring this piece from the page to the stage and teaching the audience that one, indeed, mustn’t judge a book by its cover. Well deserved kudos go out to Anthony Lane Hinkle for a stellar job and I’m looking forward to seeing his future work. 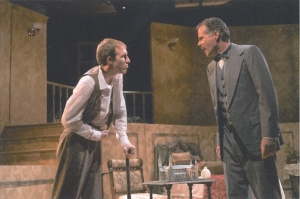 Sean Coe takes on the very important role of Dr. Frederick Treves, the brave, young doctor who tried to give Merrick somewhat of a normal life, whatever that means, as well as studied him to figure out his medical disorder. Coe has a strong command of the stage and is very comfortable as he navigates through a plethora of emotions with this character from curious doctor simply wanting to study Merrick to trusted friend making daily visits. Coe seems to truly understand the character of Frederick Treves and plays him with grace and compassion giving a truly superb performance. 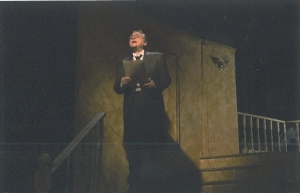 Mark Scharf, who portrays Carr Gomm, head of the London Hospital where Merrick presides, does a wonderful job projecting the sternness and class-consciousness of an upper-class Victorian gentleman. He is quite believable with his hoity-toity attitude and I imagine him looking down his nose at those who he thinks lead less than exemplary lives. He is very comfortable on stage and gives  a very strong performance. 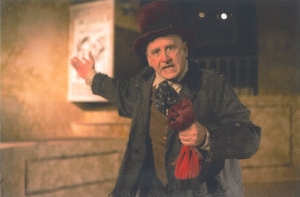 Ross, the sleezy freak show barker and low-life manager of John Merrick is played brilliantly by Frank Mancino and his characterization is on point. One cannot ignore his booming voice when he first enters onto the stage and he has a great presence that makes the audience take notice. He seems to understand the devious character he is playing and I must admit, I found myself very much disliking him which tells me he has accomplished his task as an actor superbly. He also takes on the part of a completely different type of character named Bishop Walsham How, but even then, he plays the Bishop with a tinge of “holier-than-thou” authenticity that makes the character somewhat unlikable, as well. Mancino’s performance was an admirable one but I did find him hard to understand most of the time, which may have been the cockney and/or british accent getting in the way.

Elizabeth Ung is charming as The Duchess as she sweeps in and out of her scenes and just as charming as she is as The Duchess, she is just as vile as the over confident, obnoxious Nurse Sandwich, who thinks she’s seen it all but quickly finds out she hasn’t seen the likes of John Merrick. She also takes a turn as a “pinhead” from a freak show and all of her characters, though secondary, are strong and she has a strong presence on the stage.
Darius Foreman takes on various supporting characters including a London Policeman, Porter, and Lord John and, as an actor, his skills aren’t as strong as his cast mates, but he manages to hold his own against his very strong co-horts. It is very difficult to understand what he is saying throughout the play but, the accents for his characters range from cockney to proper British and it can be quite a challenge for any actor. Regardless, I could see he is giving 100% on stage and has a good presence. 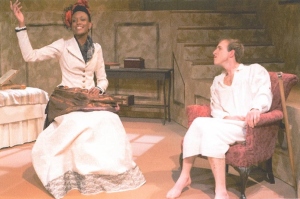 A definite highlight in this production is Aladrian Wetzel who takes on the role of Mrs. Kendal, a friend and confidant of John Merrick’s and she is an absolute joy to watch. From the moment Wetzel enters onto the stage she takes full command and is stunning with her period gowns and graceful movements. Her very unique, soothing voice resonates throughout the theatre with every line and she is very comfortable on the stage and in her interactions with her cast mates. She has a complete understanding of her character; an actress who started an acquaintance with John Merrick at the request of Dr. Treves, their mutual friend, to become a true and dear friend. Her transition from acquaintance to friend is seamless and she gives a phenomenal performance. In this challenging piece and strong ensemble, Wetzel shines bright.
Grayson Owen tackles the very challenging, titular role of The Elephant Man himself, John Merrick. If I had to chose one word to describe Owen’s performance it would be… outstanding. His performance was the stuff every actor strives for and he pulled it off flawlessly. Though physically he was an absolutely average man, his skill in physicality caused me to believe he had the ailments suffered by the real John Merrick. One of his most amazing feats was his transformation from average man into the deformed John Merrick. This transition happens, cleverly, as Dr. Treves is explaining his patient’s ailments and seemingly, right before our eyes, Owen manages to mangle his body to become The Elephant man… Superb. His vocal work was superb as his speech was supposed to be almost inaudible but yet, I understood every word he said. This role is a major physical challenge but Owen managed to keep it up throughout the entire play, save one scene, even throughout the scene changes. So exceptional is his performance, there were times I teared up not only because of his acting skills but because I believed John Merrick was speaking out. His command of the stage is second to none and he truly takes the reigns of this production, on stage. It seems as though he’s done his homework because his understanding of John Merrick is clear as he truly becomes the man himself. I am very much looking forward to seeing more from Grayson Owen in the future and he is to be commended for this stellar performance. Someone, give this man an award! 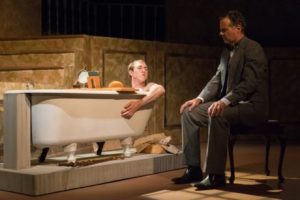 Final thought… The Elephant Man is a moving, poignant, strong, and deep piece about not judging a book by its cover and how human nature can get in the way of most things. This production is not to be missed. The performances are authentic and the production teaches us not only about The Elephant Man, Joseph “John” Merrick, but also about ourselves and how we see the world and others. It’s a timeless message of acceptance and tolerance and you will not be disappointed with this interpretation of this piece. Go see this show!
This is what I thought of this production of The Elephant Man.… what do you think?
The Elephant Man will play through October 2, Friday-Saturday at 8pm, Sundays at 2pm, and a special Saturday Matinee on September 24 at 2pm at Fells Point Corner Theatre, 251 S Ann Street, Baltimore, MD 21231. For tickets, call 410-276-7837 or purchase them online.