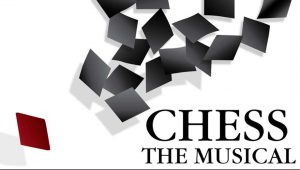 The Cold War, an international chess championship, political relations between The United States and The Soviet Union, spies, friends, enemies, lovers, enemies who become lovers… it’s all going on at Tidewater Players in their latest offering, Chess, with Music by Benny Andersson and Bjorn Ulvaeus, and Lyrics by Tim Rice. All this fodder and music by the dudes from ABBA can’t go wrong and, wherever you stand on Chess (some love it, some hate it), there’s no denying that Director Mark Briner, Music Director R. Christopher Rose and Stephanie Carlock Cvach, and Choreographer Bambi Johnson knocked it out of the ballpark with this better-flowing, energized concert version that tells the story completely and cuts out all the muddle.

Briefly, and according to the Guide to Musical Theatre (http://www.guidetomusicaltheatre.com), “This highly acclaimed musical develops the ancient and distinguished game of chess into a metaphor for romantic rivalries and East-West political intrigue. The principal pawns form a love triangle: the loutish American Grandmaster, the earnest Russian champion, and the Hungarian-American female chess second, who arrives at the international championships with the American but falls for the Russian. From Tyrol to Thailand the players, lovers, politicians, CIA and KGB make their moves to the pulse of this monumental rock score.”

Set Design by Director Mark Briner is smart and minimal and pulled this piece together nicely. As this production is more of a concert version, a large, lavish set was not needed, but a few levels and, some chairs and music stands did the job just fine and didn’t clutter the stage allowing for the superb staging and choreography to be showcased.

Thomas Gardner’s lighting design is, in a word, splendid. His use of colors, isolated lighting, and blend of cool and warm tones helped tell this story and kept the piece energized and interesting throughout. He knows his stage well and lights it beautifully, adding great value to this production.

Choreography by Bambi Johnson is impeccable. She knows her cast and the ensemble shined in each number. Upbeat, high-energy, and tight, the impressive choreography was engaging and kept the audience interested. From the smooth ballet to the rockin’ pop moves, this original choreography inspires.

Music Direction under R. Christopher Rose and Stephanie Cvach is superb and it seems quite easy with the exquisite voices with which they have to work. A small band including R. Christopher Rose on Piano, Stephanie Carlock Cvach on Keyboard, Will Poxon on Percussion, Helen Slaich on Reeds/Clarinet, and Greg Bell on Bass Guitar fill the theatre as adequately as a full orchestra and each number is polished and well-performed. Kudos to Rose and Cvach for an impeccable job.

Director Mark Briner is to be applauded for his efforts in bringing this production to the stage. As I stated, Chess is one of those shows that people love or people hate, for the most part. I’m in a small percentage that is in between where I love the music (how can you dislike anything from the dudes from ABBA?… don’t answer that), but I’m not very fond of the book. Since this is more of a concert version, the book has been cut to a minimum and the concentration is on the music which works brilliantly for this piece. Briner’s staging is tight and refined and the pacing is just about perfect. A mix of blocking and choreography brings it all together beautifully and makes for a very entertaining evening of theatre.

Moving on to the performance of this production, I’d be amiss not to mention that the entire ensemble of this piece give top notch performances and all should be commended for their work and effort to make this a stellar production, a whole.

To mention a few, Terry D’Onofrio as Alexander Molokov and Aaron Dalton as Walter de Courcey take on the roles of puppet masters, of sorts, guiding their chess champions for political gain. D’Onofrio is well suited for his role as Molokov and has a good grasp though his use of an accent may hinder his performance rather than enhance it, especially vocally in the numbers in which he is featured. However, his performance is strong and confident and he pulls it off nicely. Dalton gives a strong performance with a solid stage presence. Vocally, Dalton gives impressive renditions of the numbers he’s in, such as “Merchandisers.”

Eileen Aubele and Barbara Hartzell are marvelous Svetlana Sergievskaya and Florence Vassy, respectively. Hartzell excels in this conflicted character, portraying that conflict in delivery of dialogue and physical gestures and great chemistry with her cast mates while Aubele, who comes in later in the piece, makes the most of her stage time with a poised presence and good hold on her scorned, but seemingly forgiving character. Vocally, both actresses are powerhouses and fill the theatre with a smooth, booming sound and harmony as in numbers like the poignant “Someone Else’s Story” sung beautifully by Hartzell, and the powerful duet, “I Know Him So Well.” Aubele and Hartzell are to be celebrated for their performances.

Taking on the role of cocky International chess champion (and former champion) Frederick Trumper, Rob Tucker is a highlight and shines in this production. He embodies this character and portrays him with just as much pompousness as required and his transition in his character is seamless from beginning to end. Vocally, Tucker is superb which he showcases in his strong and confident performances in numbers such as the popular, high-energy “One Night in Bangkok” and the emotional “Pity the Child.” Tucker is certainly one to watch (and you can’t help but to) in this production.

Rounding out the featured cast is standout Shawn Doyle, taking on the multifaceted role of Anatoly Sergievsky. Doyle has performed this role numerous times but it’s as fresh as ever. He understands this role inside and out and he gives a consistent and exquisite performance. He portrays the conflict, confusion, and hurt that is required of this character and gives a vocal performance that is excellent, to say the least. His renditions of the duet “You and I” and the Broadway standard, “Anthem” is smooth, emotive, and resonates throughout the theatre making for a memorable and exquisite performance.

Final thought… Even the cold war is over, Chess is still as relevant today as when it was released. This production is well put together and cuts what needed to be cut and still told the story in its completion. The performances are spot on and the entire ensemble is giving 100% effort. Staging keeps the audience engaged and interested and the music is performed near flawlessly. Admittedly, Chess is not on the top of my list when it comes to musical theatre, but it’s mainly because of the book. The music has always been the driving force in this piece and in this production is more concert-like making for an absolutely joyous evening at the theatre. Get your tickets now because this is not one you want to miss this season.

This is what I thought of Tidewater Players’ production of Chess… What did you think? Please feel free to leave a comment!

Chess will play through October 1 at Tidewater Players at The Cultural Center at the Opera House, 121 N. Union Street, Havre de Grace, MD. Purchase tickets at the door one hour before show time or purchase them online.