Running Time: 2 hours and 45 minutes with one 15-minute intermission
Lately, within the last few years, either fortunately or unfortunately, a plethora of “new” musicals to hit the scene have been based on Hollywood films. There have been some doozies such as Ghost or The Toxic Avenger and even Evil Dead the Musical (which I actually adore… hey, we all have our vices) but, with that said, some actually lend well to the stage such as Hairspray, The Bodyguard, Anastasia, Newsies, and the like and Dundalk Community Theatre’s latest offering, Shrek the Musical, based on the Dream Works Animation Motion picture and the book by William Steig, with Music by Jeanine Tesori and Book & Lyrics by David Lindsay-Abaire Directed by John Desmone, with Music Direction by Nathan Christover Scavilla, and Choreography by Vincent Musgrave, is one of those that actually transfers nicely to the stage and fun for the entire family. 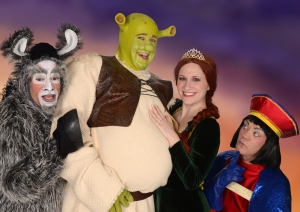 In a nutshell, the story goes something like this: A bunch of fairy tale characters are banished from the town of Duloc by the Napoleon complex-ridden Lord Farquaad and they end up in the swamp that is already inhabited by a big green, solitary ogre, Shrek, and he wants nothing to do with any of it. To get them all off his claimed land, he goes to Duloc to try and reason with Lord Farquaad but along the way, Shrek meets and saves Donkey, a talking donkey, who is being chased by Lord Farquaad’s guards. Donkey takes a shine to Shrek and sticks to him like glue. Once in Duloc, Farquaad agrees to officially deed the land over to Shrek, but in return, sends Shrek on a mission, of sorts, to rescue Princess Fiona, who has been locked up in a tower for about 20 years, guarded by a fire-breathing dragon. Farquaad plans to marry Princess Fiona to rise in the ranks of monarchy and become a king. Shrek and Donkey succeed and escort Princess Fiona back to Duloc and along the way, something sparks between the princess and the Ogre, but Fiona is hiding a deep, dark secret and she wants to keep it that way. The princess is delivered to Lord Farquaad but, as in all good stories, there’s a twist that you’ll have to see, if you don’t know it already, that is.
Set Design by Marc W. Smith is simple, yet quite appropriate on this one. Being familiar with Smiths outstanding design work, he seems to have toned it down a bit for this production using backdrops and cutouts as opposed to his usual original complex and detailed design and construction. This isn’t to say the Set Design wasn’t amazing, because it was very polished with professional backdrops from Kenmark Scenic Backdrops that flew in and out with ease.

Costumes for a show like this can be challenging and downright difficult but Costume Design by Tracy Bird is spot on as all the fairy tale characters have appropriate wardrobes and each is easily distinguishable. Shrek, Donkey, Fiona, and Farquaad have near perfect wardrobes and each fairy tale character has his or her own unique look making for a vast and quite impressive Costume Design by Bird.
Vincent Musgrave hits the nail on the proverbial head with his choreography, especially for certain numbers such as “What’s Up Duloc?” and “Morning Person” and for as enthralling as these numbers were, dance-wise (and they were amazing… the ensemble members included in these numbers are on point!), it feels as though so much concentration was put into these couple of numbers that the others were a bit looser. Regardless, overall, the choreography is tight and the ensemble is dedicated and well-rehearsed giving 100% to each number. 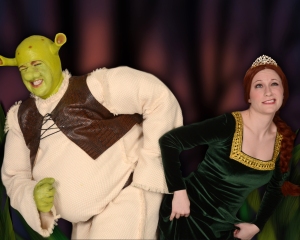 Musically, this production is top notch and Music Direction by Nathan Christopher Scavilla is absolutely on point. He already has an extremely able ensemble to work with so all the numbers were strong and confident. The pit orchestra is flawless in their efforts and though they are not listed in the program, I highly suggest an insert thrown in with all their names because this orchestra is well-rehearsed and polished, sounding like a CD playing or a professional Broadway theatre orchestra. Kudos to Scavilla for getting together such a great sounding orchestra and getting his cast to sound near perfect and in harmony in every number.
Baltimore theatre veteran John Desmone takes the helm of this production and his Direction stays true to the film almost everyone knows but still manages to put his mark on it and express his vision of acceptance, tolerance, and self discovery. Knowing a little bit of the history of Shrek the Musical in Baltimore theatre, I’m aware that the actors portraying Shrek and Donkey have a history playing the roles, opposite each other, in several other productions and it seems Desmone may have depended on that history a bit and left Shrek and Donkey to their own devices but it didn’t hinder the production value a lot. He tells the story in a well-cast, well-thought out production guiding this talented cast to a very entertaining and fun production.

Peter N. Crews takes on the role of Lord Farquaad, the small minded and statured villain of the story and, anyone who tackles this role has my applause and ovation because, physically, I couldn’t imagine spending an entire show crawling around on my knees. It may be easier than it looks, but, still… Crews has a good grasp of this character and gives an admirable performance but it falls a little flat. His portrayal seems a little more whiney than angry, though it could be a directorial choice. Vocally, Crews is OK and holds his own in numbers such as “What’s Up Duloc?” and “Ballad of Farquaad.” Overall, he gives a confident performance and, like I said, anyone who takes on this crazy role has my kudos for his bravery and physical prowess.

Gary Dieter tackles the challenging role of the chatty, expert one-liner, loyal friend Donkey, who doesn’t leave Shrek’s side once they meet. Dieter is a terrific showman and absolutely makes this role his own and doesn’t give a carbon copy of the uber-successful portrayal Eddie Murphy gave in the film and he has my utmost respect and admiration for that aspect of his portrayal. He understands his audience and the audience loves him. However, though his asides and ad libs had the audiences eating out of his hands, I would have preferred he pulled it back a bit as it seems he’s trying too hard for the laugh. Again, the audience adores him and he had them laughing in the isles so, maybe it’s just me. Dieter is an accomplished dancer, but in this role dancing isn’t really showcased and his vocals are commendable in his featured numbers “Don’t Let Me Go” and the soulful “Make a Move,” in which he is accompanied by the titillating 3 Blind Mice (beautifully played by Lacy Comstock, Emily Morgan, and Sydney Phipps). Overall, his comprehension of the story and his character is apparent and he has a great command of the stage making for a strong, confident performance. 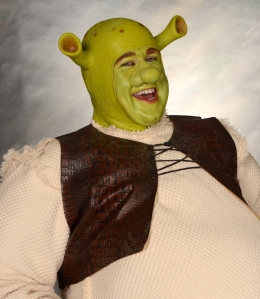 Taking on the titular character of Shrek, Dickie Mahoney hits the ground running with this role. As stated before, Mahoney has a history with this character and he’s comfortable and confident in his portrayal. He gives us a brilliant portrayal but, at times, it seems he is going through the motions, but after performing the role so many times, it’s somewhat understandable and the audience, en masse, doesn’t seem to mind. He, too, makes the part his own and does not give us a copy of the Mike Meyers portrayal of the big green ogre and it’s refreshing to see. Vocally, Mahoney has a commanding smooth, clear voice that resonates throughout the theatre making the songs like “Bright Big Beautiful World,” “I Think I Got You Beat,” and the poignant “When Words Fail” sound effortless. He does utilize the Irish/Welsh/Scottish accent always associated with this character and he does lose it slightly every now and again, but all things considered, he’s got it down pat. Overall, Mahoney gives a praiseworthy performance that is filled with heart and dedication that is a joy to watch.
Two standouts in this production are Sherry Benedeck as Princess Fiona and Lisa Pastella as the Voice of Dragon who belt their way through songs and take command of not only the stage, but of the entire theatre.

Sherry Benedek as Princess Fiona is a powerhouse. She’s a triple threat, taking the role and putting her own twist on it, making it original and vocally, she is a powerhouse. I found myself absolutely enthralled in her singing in numbers such as “I Know It’s Today” (with the younger Fionas, Juliet Jones and Anna Adelstein, who both hold their own and blend nicely with Benedek) and “Morning Song” in which she gets a chance to show us her brilliant dancing/tapping abilities. Benedek is a joy to watch and I’m looking forward to seeing more from this actress.
Dragon, though a puppet, needs a heart and soul and Lisa Pastella gives her just that. We don’t see Pastella (except when she’s scurrying around as The Wicket Witch with the ensemble), but with her featured number, the soulful, heartfelt “Forever,” I didn’t need to see her because he voice did it for me. Vocally, she is crystal clear, smooth, and hits every note flawlessly making for an exciting and powerful performance. 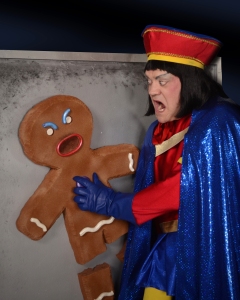 The entire ensemble works well together and seem to be having a great time up on the stage together. Featured characters like the fed up activist, Pinocchio (Josh Schoff), The Big Bad Wolf in drag (Mark Lloyd), The Three Bears (Stacey Bonds, Vincent Musgrave, Sarah Jones) and, who could forget poor wounded/cracked Gingy (Veronica Lockett) round out the cast nicely and the actors bring an updated feel and humor to them, as required by the story. All around, the entire cast of this show deserves kudos for their dedication and effort for their outstanding chemistry and giving 100% to this production.
Final thought… Shrek: The Musical at Dundalk Community Theatre is a family friendly romp peppered slyly with a few adult-oriented jokes to keep it interesting, with fabulous voices, exciting choreography, colorful and fun costumes, and a stage full of familiar and new fairy tale characters that will keep you entertained and engaged throughout the evening. Beyond the great production value, the important message of this piece, which is acceptance, not only of others, but of yourself, is what you should take home. The performances are strong and confident and the entire ensemble works quite well together making for a charming, enjoyable, and toe-tapping evening of theatre that should not be missed!
This is what I thought of Dundalk Community Theatre’s production of Shrek the Musical… What did you think? Please feel free to leave a comment!
Shrek the Musical will play through May 7 at Dundalk Community Theatre, The Ravekes Theatre, CCBC Dundalk, 7200 Sollers Point Road, Dundalk, MD. For Tickets, call the box office at 443-840-2787 or purchase them online.
Email us at backstagebaltimore@gmail.com
Like Backstage Baltimore on Facebook
Follow Backstage Baltimore on Twitter (@backstagebmore) and Instagram (backstagebaltimore)